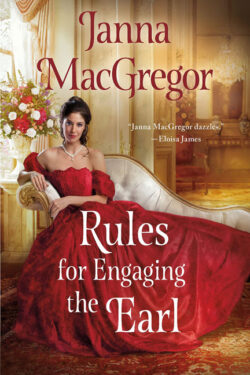 Jonathan Eaton, Earl of Sykeston, is a former marksman for the British army. He returns home a broken shell of his former self. With the threat of a possible court-marshal, Jonathan isolates himself from the world. When his childhood friend asks for help, he rushes to her side. He willingly agrees to marry her. However, Jonathan cannot be the husband and father-figure Constance needs, not with an inquiry hanging over his head. Can Jonathan clear his name? Will he come to grips with his mental and emotional demons? Or will Jonathan realize too late what he has with Constance?

Constance Lysander owns and operates her family’s maritime business. Her late husband leaves her penniless, pregnant, and two other wives. Constance needs to marry quickly to escape polite society’s harsh scrutiny. She chooses Jonathan for the part. Constance intends on making their marriage work; however, her mulish husband insists on keeping an emotional distance. Plus, she has a malcontent patron intent on destroying her business’ reputation. Can Constance help Jonathan overcome his emotional and mental hurdles? Or is this marriage doomed from the start?

Jonathan is such a swoon-worthy, damaged hero! He demonstrates the difficulties some soldiers have on returning home from war or active duty. I empathize with Jonathan’s need to alienate himself from the world. He has had his trust betrayed in the worst way possible by his commanding officer. What I adore the most about Jonathan is his dependability, especially towards Constance. He came to her when she needed him most, even at his lowest. Jonathan, also, had no interest in taking over her family business. Instead, he offered to help only when she wanted it.

I am so happy that Constance received her happily-ever-after. She really deserved one, especially considering the ordeal her late husband left her to face. I like that Constance never tried to play the victim. Instead, she became proactive in finding a solution for her and her newborn daughter. What I adore the most about Constance is her patience with Jonathan. She understood he had some emotional and psychological issues that he had to come to terms with. Jonathan’s behavior sometimes tried her patience, but Constance never once gave up on him.

RULES FOR ENGAGING THE EARL is book two in Janna Macgregor’s historical romance series, THE WIDOW RULES. The story can easily standalone. However, I recommend reading the first book to understand Constance’s peculiar situation and her close relationship with Kat and Beth. The author does an excellent job gleaning the important parts from the previous book. I hope the next book reveals what the late Lord Meriwether did with the three ladies’ dowries.

RULES FOR ENGAGING THE EARL is a charming tale of two souls learning to overcome their trust issues. I am so glad I took a chance with this series. It does not disappoint. I cannot wait for Beth and Grayson’s book!