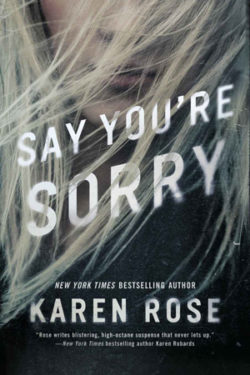 There is no way you can pick up a Karen Rose book, begin reading, and put it down before you reach the end. SAY YOU’RE SORRY is an exciting thriller that grabs you immediately and doesn’t let you go.

There is a serial killer running loose in Sacramento, California. Victims of this killer die horrible deaths with initials carved on their bodies. Daisy Dawson, a recovering alcoholic, leaves an AA meeting and ends up crossing paths with this murderer.  However, she is lucky—she lives to tell FBI Special Agent Gideon Reynolds what happened. During her attack, she also grabs hold of a necklace the perpetrator is wearing, which Gideon recognizes.

Both Daisy and Gideon have suffered greatly throughout their childhoods. Gideon recognizes the symbol on the necklace Daisy grabbed and believes the cult he was forced to grow up in might be responsible. As he begins his investigation, it becomes apparent that Daisy is going to be involved whether he wants her to or not. He wants her to stay safe, but she is not going to sit back and wait for more women to become victims. She wants to help stop him, no matter what.

This was such an exciting book! I can’t wait to read what Ms. Rose has in store next.