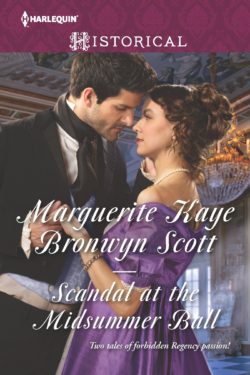 SCANDAL AT THE MIDSUMMER BALL has two historical novels written by two different authors that have the Brockmore Manor House Party, its hosts and guests, at its core. The stories flowed smoothly from one to the other and kept my interest from the first page to the last. Both stories take place during the same seven days with the same events, location, and characters, although the stories focus on different pairs as love interests.

Marguerite Kaye’s THE OFFICER’S TEMPTATION has English society and some of its military officers entwined with the Russian acrobats, The Flying Vengarovs, Katerina, and her brother Alexandr/Alexei. The Brockmores are known for their matchmaking skills, but during this week’s events leading up to the Midsummer Ball, the guests are themselves picking who to pair off with, which doesn’t always sit well with the Duke and Duchess. Their biggest disappointment seems to be with their niece, Lady Verity, and Colonel Fergus Kennedy. The colonel fought under Wellington and is considered by many to be one of his trainees.

There were multiple storylines going on at once. Katerina seemed wise beyond her years as well as a good judge of character. The pairing of Katerina and Fergus is an interesting one since they come from such different worlds. There were multidimensional characters, with flamboyant Sir Timothy leading the way! The colorful descriptions of the grounds, the events, and the manor made me feel like I was there. Love mixed with acrobatics, secrets and the breaking of society’s rules to create a magical storyline. There are twists and turns, as well, but the story ends with happily ever afters.

Bronwyn Scott’s THE DEBUTANTE’S AWAKENING takes place during the same week but has Zara, a three-season debutante, recently jilted, at its core. As her family scrambles to save face, they hope her invitation to Brockmore Manor will have a positive outcome. But Zara has other plans–to make her own decisions. She begins a dangerous flirtation with Kael, but to what end, since he has no prospects, owning only a small horse farm, and is merely a guest? As she’s paired up during the week with the more suitable Lord Markham, she’s bored and rebellious toward the ton and convention. Is she ready to break all the rules and get involved with Kael, even after the week is over?

A journey through tears and laughter, love and disbelief take the reader to a magical ending. The epilogue tied up most of the loose ends but still left me wanting more. A great story.

Marguerite Kaye’s books have brought me much enjoyment, while Bronwyn Scott is new to me. I look forward to reading many more books written by either and/or both of them. I can only hope they collaborate again.