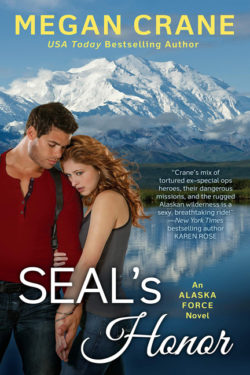 SEAL’S HONOR sucked me in from the first page to the last. Grizzly Harbor, Alaska and Chicago play the backdrops in this first book in the ALASKA FORCE series. The first chapter is set six months prior to the story and gives a lot of background information on the members of Alaska Force, and especially on the character of Blue, who is no longer a Navy SEAL.

The scenic descriptions were breathtaking and vivid. The characters had depth and plenty of secrets too. Blue and Everly meet up in Alaska, where Everly goes looking for him for help despite not having seen him for twenty years. She needs him to help clear her as someone who isn’t crazy. Everly witnessed a murder that others say didn’t happen. And once she and Blue get together, things get interesting fast.

Blue and Everly have an attraction, but both are fighting it. Watching them take a step closer and two or three back was heartbreaking, especially given Blue’s past. As the story twists and turns with a lot of mystery, murder, and near murders, my interest was held. Blue and Everly make a good team, but he can’t get away fast enough. Or so he thinks at first…

There are lighthearted moments thrown in to this gripping romance. I look forward to reading the next book in the series, SNIPER’S PRIDE, to see what the team is up to next.

Ms Crane, who also writes under the name of Caitlin Crews, is a new-to-me author. I look forward to reading more of her books, not just those in this series.