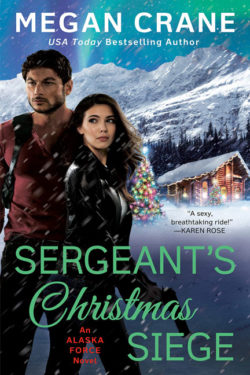 It was nice to be back in Alaska with SERGEANT’S CHRISTMAS SIEGE, the third book in the ALASKA FORCE series. I hope there will be more.

Although the book is set at Christmas, there doesn’t seem to be anyone too excited to celebrate it. This is Kate and Templeton’s story, and they are two professionals…until they let their guard down.

She’s an Alaska State Trooper who likes to bring down cults due to her upbringing. It’s a little scary meeting up with some of her family members since she’s definitely estranged from them, and for good reason. Kate meets Templeton when she’s in Grizzly Harbor to look into the group called Alaska Force, of which he’s a member. There have been some unexplained crimes in the area. They don’t hit it off when they first meet, though they are more alike than they think.

There seems to be danger around every corner along with the sizzling attraction between Kate and Templeton. The reader will be reunited with characters they’ve met in previous books. The author’s scenic descriptions are spot on, and the characters are well developed. The suspense is well done, as Kate and Templeton, along with members of Alaska Force, try to figure out who is really behind all the crimes being committed.

The pacing made the pages fly by, and the ending tied up everything while managing to take me by surprise. I hope there will be more books in the series since there seems to be more story to tell.

I’ve read and enjoyed books written by Ms Crane and Caitlin Crews, another name Ms. Crane writes under. I look forward to reading whatever either of them write next!