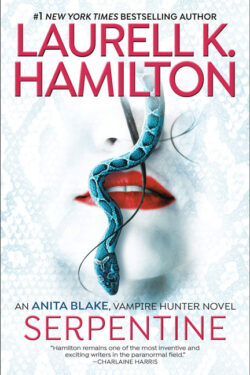 Anita Blake has very little time to relax from her high stress job as a US Marshal in the preternatural division of law enforcement–there are just so many paranormal bad guys and would-be gods who have to be dealt with to protect the unaware humans. So when Ted, her best friend and fellow US Marshal, asks her to be his best man/maid in his destination wedding, she and her men are thrilled to have some down-time to look forward to.

Men, you might ask? It’s complicated. Anita started out in her career as a necromancer with the power to raise the dead. Along the way, she was seduced by Jean Claude, the eternally enchanting vampire master of her city. They have both gained much power from being linked. They also share other shifters to satisfy the succubus that lives in Anita and demands lots of frequent sex. She also has various shifters living inside of her, which she barely keeps control over. In this book, Anita is kept too busy to have more than a couple of quick sexual encounters with her lovers. Mostly they all talk a lot about the logistics involved with so many men sharing one woman–and each other. And how to ensure they all get what they want and need from their unconventional situation.

SERPENTINE is not a romance as much as a drama, with the wedding planning going awry and a crazy bridesmaid who thinks she’s protecting the bride from a terrible mistake. Also, there is a mystery, since Micah, one of Anita’s shifter, is the head of a group known as the furry coalition–he has been contacted by a family who lives on the remote island off the coast of Florida, where the wedding is to take place. The family has asked for help to try to end, or at least understand, what they regard as a curse, in that many of them enter puberty only to have snakes suddenly growing out of different parts of their anatomy–like as arms, or as hair. Of course, this leads to the book title.

I remember reading years ago that Ms. Hamilton said that when she’s in Great Britain, they tell her she has too much violence in her books. But when she’s in the US, she’s told she has too much sex in her books. She was illustrating the differences in the two cultures—what we accept and what we try to avoid. This book is written for the US audience. Ms. Hamilton is capable of writing extended sex scenes. She’s also very good at writing violent scenes involving human bad guys, as well as inhuman creatures that seem drawn from unholy nightmares.

Like I said, this book isn’t a romance. It’s a drama-filled mystery that does fairly well at explaining the back-stories of the characters, in case you’ve never read any of the previous Anita Black stories. Since I’ve read at least the first fifteen books, her explanations caught me up on how Anita’s life has progressed. And I’m glad to say that Anita is still kicking butt, and still sexing it up with her various men—as well as considering expanding into allowing some females to share themselves with her. But she’s still an enigma—a female who is more powerful than almost any paranormal creatures, yet who continues to live her human life as well, and to devote time and energy to protecting the merely human.