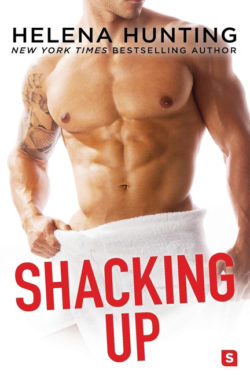 Helena Hunting weaves a tale of the lifestyles of the rich and famous and a female protagonist who just wants to live out her dream in SHACKING UP.

Ruby Scott is doing everything in her power to make it as an actress in New York. If she fails, she will be forced to work with her father and her latest stepmother at a pharmaceutical company that creates penis enlargement pills.

Enter Bancroft Mills, a former professional rugby player and the cousin of Ruby’s best friend’s fiance. At a party for the engaged couple, Bancroft mistakes Ruby for his date and kisses her while recovering from the flu.

When Ruby’s father stops footing the bill for her apartment, she loses out on an audition due to an illness, and she is on the verge of being homeless. Ruby thinks she has officially hit rock bottom.

Upon realizing his germs cost her the audition, to make amends, Bancroft asks Ruby to watch his pets while he travels overseas for five weeks.

In his absence, the two create a bond that exceeds far beyond that of a landlord and a tenant.

Due to the physical distance between the two characters, the author was forced to rely heavily on the dialogue, and she pulled it off wonderfully. The story flowed well, but some scenes were unnecessarily drawn out

Despite the high page count—almost 400 pages!—the witty banter and steamy sex scenes help the reading experience to fly by.