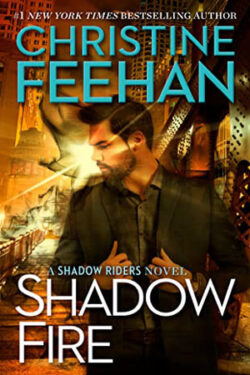 SHADOW FIRE is book 7 in the Shadow Riders Series, and this story focuses on Elie Archambault, an honorary member of the famous Ferraro family. Elie has decided it’s time to be paired up with another shadow rider and raise a family. When he was younger, he met the woman he knew he was meant to love but was too arrogant to claim her. Now he thinks it’s time to marry and raise a family so he agrees to marry by proxy to a woman within the shadow rider community. He has not seen his bride. but it doesn’t really matter.  This is a business arrangement and not a love match.

Brielle Couture is a shadow rider but not a very successful one. She becomes ill whenever she uses her special skill so has been working as a nanny, which she loves. Her family belittles everything she does because they believe her older sister is the true successful shadow rider of the family and needs her to make a successful match within the rich Archambault family.

But Brielle is the love of his Elie’s life, and he will not let her go. She had no idea when she was married by proxy that it was to Elie. He humiliated her when she was younger, and she cannot forgive how he treated her. He was also supposed to partner with her sister.  Why would he want Brielle instead?

The Shadow Rider series takes you into the dark mafia underworld where murder and human trafficking run rampant. The Shadow Riders themselves have special abilities that allow them to move sight unseen from place to place, seeking justice for those who have suffered at the hands of these criminals.

I have enjoyed the entire series but I do warn readers that there is graphic sex in parts of the story. However, the ability to have a unique group of people bring the nastiest of criminals to justice is very satisfying.