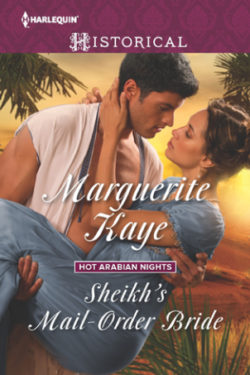 When I was asked by the author if I’d like to read book two in her HOT ARABIAN NIGHTS SERIES I jumped at the chance and I was not disappointed.  While the premise is similar – an Englishwoman meets up with a prince in Arabia – the book diverges from there.  Kadar and Constance feel an instant attraction when they meet at the palace after she is thrown overboard during a storm on her way from England to India.  When she is found off the coast of Murimon in Arabia, she had already been presumed dead since others had died and she uses that to her advantage. Constance has an independent streak even though she was heading to India to meet her future husband who had paid her father handsomely for the right.  Kadar has a bride in his future as well since a prince must produce an heir to keep his country moving forward.

Their attraction doesn’t waver but only seems to get stronger the more time they spend together.  He confides in her more than he’s ever felt comfortable talking about himself and his dreams. They seem to also read each other well and when they’re together it’s interesting to see their interactions but also their body language. I love his various nicknames for Constance too.  They have more in common than they expected to because of their diverse backgrounds but since Constance is interested in astronomy, as is Kadar, he bestows on her the title of Court Astronomer.  While in Murimon she is to map the stars for him since it will be months before a ship arrives in the area and she’s unable to continue on to India until then.  There is a lot of dialogue about the telescope as well as the stars and constellations but it is highlighted in other interesting ways as well.

The descriptions are very vivid and made me feel that I was there.  The colorful and lightweight clothing as well as the palace, the sea, the sand, the stars, the horses and camels and the lands touched on many of my senses.  The protocols were explained throughout and we were able to see the human side of Kadar which was touching.  I loved all the activities he came up with for he and Constance to be able to spend time together. The interactions with other characters were meaningful and always had a purpose. There was wonderful closure but I would have liked an epilogue since I hadn’t realized I had reached the end of the story until I turned the “last” page in my Nook.  I thought there was still more story to tell.  There were many twists and turns along the way but also an unexpected happily ever after in the offing.  The historical note at the back of the book gave some facts about the ship Constance sailed on as well as some of the legends surrounding the stars and the sea people that were interesting to read.

Kaye is still a fairly new to me author having read THE SOLDIER’S DARK SECRET and THE SOLDIER’S REBEL LOVER as well as her story THE OFFICER’S TEMPTATION that was part of the book SCANDAL AT THE MIDSUMMER BALL along with the first book in this series, THE WIDOW AND THE SHEIKH.  I look forward to reading more books by Kaye since I have a lot to catch up on and I’m happy to see there will an additional two books in the HOT ARABIAN NIGHTS SERIES, which lives up to its name not only because it takes place in the desert!