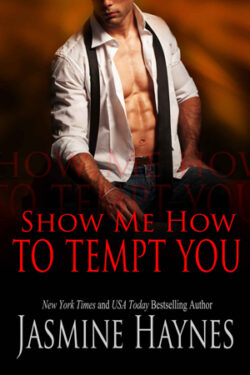 SHOW ME HOW TO TEMPT YOU is book 11 in the Naughty After Hours series by Jasmine Haynes.

I’ve enjoyed all the books in this series, but the nerd and the dream girl really drew me in from the start.

Lia Ferroni was the high school cheerleader, and Finn Rafferty the nerdy bookworm. Thirty years later, they meet up, and Finn is no longer the nerdy teenager. He’s a stunningly handsome adult male Lia is immediately drawn to. But Lia is VP of human resources, and Finn’s company is merging with hers. She sees a relationship between them as a conflict of interest. Finn sees it as an opportunity of a lifetime to date his dream girl.

Lia can’t ignore her feelings for Finn, then she remembers he was the boy her high school boyfriend and later husband tormented all through high school. She feels guilty because she doesn’t feel she did enough to stop the bullying.

This was an emotional read with several steamy scenes. I especially liked the ending that showed growth even in the most cruel characters, and a heartwarming happily-ever-after.