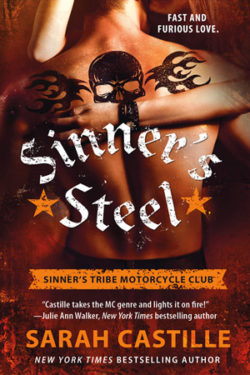 Zane “Tracker” Colter takes his role as strategist for the Sinner’s Tribe Motorcycle Club seriously, and not much can distract him. However, when it comes to childhood love interest Evie, his focus isn’t on bikers and enacting vengeance. It’s on the one that got away.

Tracker hasn’t seen Evie in years. So he’s stunned when he sees her in a customs motorcycle shop – even more shocked at the revelation that she’s dating one of his deadliest rivals, Viper, the leader of the Black Jacks. Evie’s transformed into a self-confident, extremely talented, beautiful woman and Zane can’t help but desire her all over again. But pursuing her will come at a cost – one he’s willing to pay. The question is can he win her heart all over again, and if so, can he protect her from Viper and the Black Jacks’ vengeance?

Zane might be a member of a motorcycle gang. But from the very beginning, you can sense the sensitive side to him, especially when it comes to Evie. He’s the kind of guy who will do anything for his friends but at the same time thinks nothing of destroying those who wrong them. Evie is pretty much an innocent, whose only connection to the MC biker world is because of her artistic talent. Until she meets Viper, who’s probably one of the most vile characters I could have imagined. The romantic connection between Zane and Evie is intensely hot and one that as a reader, you just know is meant to be. SINNER’S STEEL is an intense read full of passion, angst, lots of biker club politics, and tons of politically incorrect attitude. There’s also the overwhelming sense that Sinner’s Tribe motorcycle club is far more than a club – it’s a family… one that will do anything for one of their brothers.

SINNER’S STEEL is the third addition to the SINNER’S TRIBE MOTORCYCLE CLUB.  Sarah Castille has cemented my love for the MC genre with her witty, violent, sometimes crass but infinitely sexy look into the lives on these notorious bad boys. Be sure to check out all the titles in the series (they can be read as stand-alone reads as well).