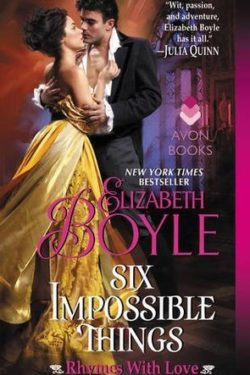 While part of a series, SIX IMPOSSIBLE THINGS was a good stand-alone book. Elizabeth Boyle introduces the reader to an unusual woman’s role in the early 1800’s. Rosalie is a young marriageable woman socialite who wants to be her own person not someone’s wife, lover, mother etc. She wants to be a spy and work for the home office like her father and brothers. There is one person she would be interested in but he (Brody) treats her like a sister (or so he thinks). Rosalie is already doing undercover work and her persona has not been discovered.

So the story begins with Rosalie running into Brody in her costume of choice and having an amorous kiss making things quite interesting. Rosalie is still doing the ‘season’ (#4) in London and is still doing her spying with an agenda. Things get sticky when Brody realizes Rosalie is the woman he is interested in (Rosalie’s other persona). Problems arise as Brody tries to stop Rosalie and she’s still doing her own thing. The problem that Brody doesn’t want to marry (or so he thinks) but his mother is very against Rosalie as his bride. This comes to a head when Brody accidentally compromises Rosalie and they try to hide it. But gossip runs rampant. Things come to a head when the two have to join forces to resolve matters for the home office. That being said there’s a whole cast of characters that make life interesting.

There’s plenty of action and a few twists that keep things going. I found that you really need to keep reading through the first few chapters to get the gist of what’s happening and for the adventure to progress to the point that you can’t stop reading and wanting to find out what’s going on.