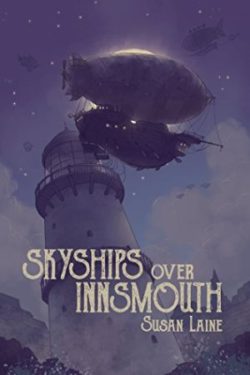 Dev captains a scout airship called Smoke Swallow for Canal City. He and his four crewmates search the world for necessary supplies, information and possible Cataclysm survivors. Dev battles against his growing attraction to his scholarly shipmate, Shay. He and his crew find the enigmatic fishing town they had been searching for. However, Innsmouth’s desolate appearance discourages hope. When a crewmate goes missing, Dev dares to overlook the creepy dangers the place holds in search of her. Things in Innsmouth prove to be more sinister and dangerous than what they are prepared for.

Shay is the airship’s scholar. He joins Dev on their latest expedition to the mysterious Innsmouth, Massachusetts. A prior relationship keeps him from acting on the intense attraction Shay feels for his captain. Despite his limitations, he helps Dev search the forsaken town in hopes of finding their missing comrade. Shay and Dev, however, discover horrendous, human-fish like creatures. They must escape Innsmouth’s dangerous perils in order to return to warn their fellow man about the hybrid creatures intent on ruling the world. Can Shay and Dev escape in time to thwart the creatures’ diabolical plot?

Dev gave the impression of a gentle-giant, quite different and refreshing from the usual arrogant, alpha types I read in books. I like his unwavering devotion and loyalty to his crewmates. No matter the circumstances, nor his uneasiness and fright, he refuses to leave anyone behind. I admire how Dev defers to Shay’s knowledge before making a final decision or judgement on a situation. He accepts that he has a rudimentary knowledge on given things.

Shay is the perfect fit to Dev. The two worked in perfect concert with each other throughout the book, often differing to each other’s strengths. I like how Shay can keep his wits about him in a crisis. He knew when to rationalize a situation to help his captain and love cope. I also like that even as a scholar, he too is prone to bouts of insecurity.

SKYSHIPS OVER INNSMOUTH is a standalone book by Susan Laine. I am unfamiliar with H.P. Lovecraft’s works, so the Lovecraftian themes embedded in the story were lost on me, hindering my enjoyment of the story. I wish the story had stronger steampunk elements.