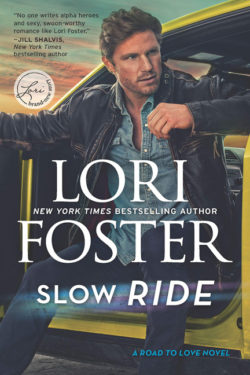 SLOW RIDE is the second book in the ROAD TO LOVE series, and I was immediately immersed in the story. This is Jack and Ronnie’s story and oh, what a story it is. She’s skittish and only does one-night stands. He loves playing the field. When they first meet in a local bar, sparks fly until she learns who he is. Since they are supposed to work together, although she tries to convince him not to take the job, all bets are off. I loved how they interacted and how she learns to trust not only Jack but his family too.

We’ve met Jack and his family—mom, brother, and sister-in-law—in the first book in the series, DRIVEN TO DISTRACTION. I like that they had roles in this story and were not just mentioned in passing. Brodie’s dog, Howler, is once again part of the story, but so is the kitten that Jack and Ronnie find and rescue while on one of their jobs. They name him Peanut, and I love how he and Howler spend time together. Where one is, the other follows.

There’s a darkness to the story due to Ronnie’s family life. Some ugly things have happened to her. There’s also someone out to get her. Her bosses are definitely quirky, which makes it fun. As in the first book, Brodie and Jack’s business, Mustang Transport, is once again involved. I enjoyed getting to know more about the characters and seeing how easily Ronnie could be included if she let herself. Watching Ronnie learn to depend on others is heartbreaking, but seeing how she and Jack understand each other and how she’s included by everyone in Jack’s family really made the story.

The story is filled with family and friends. There are good guys and bad, secrets, and danger that makes the romance pop. There’s a nice flow to the story as well as nice closure. In the back of the book is a teaser from the next and last book in the series, as well as excerpts from two other books—SISTERS OF SUMMER’S END by Ms. Foster and DOWN AND DIRTY by Rhenna Morgan. I look forward to reading all of them.

Ms. Foster is an author whose books I enjoy, even though they have lots of heat and are sometimes a little more edgy than I like. I look forward to reading whatever she pens next.