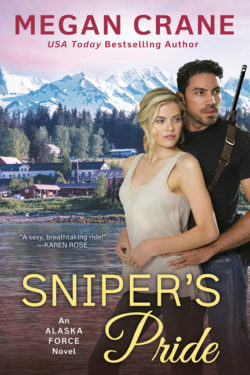 SNIPER’S PRIDE is the second book in the ALASKA FORCE SERIES and a nice continuation from SEAL’S HONOR. It was great to be reunited with the men who make up Alaska Force. All are former military who had trouble acclimating into their previous civilian lives or just chose not to. This is Griffin’s story, along with Mariah, the snooty society woman from Atlanta who he thinks is only fleeing from a figment of her imagination and is in no way in any danger. Boy, is he proven wrong!

As the story unfolds, it takes a lot of twists and turns. We begin in Atlanta and are taken on a circuitous route to get from there to Alaska, where Mariah flees to escape imminent danger from her husband, or so she believes, after two attempts on her life.  As we get to know Griffin and Mariah, their lives couldn’t be any more different. He wants nothing but for her to go back to her nice life in Atlanta. As she burrows under his skin, little by little the chemistry between them flares. When he’s ultimately proved wrong about her safety, all bets are off!

I loved learning both their back stories and watching them take one step forward and two back. Seeing Mariah trying to figure out who she really is was fun to watch. She’s definitely a lot stronger than she ever thought.

The story is filled with danger and adventure, replete with military ops and a mystery to solve of whodunit. I like the descriptions of Alaska, a place I hope to visit someday. The interactions between Griffin and the rest of the operatives are interesting to watch, especially when they see what he can’t. There is a fast pace to the story with a surprising ending. The epilogue (that takes six months later) includes a happily ever after that’s sweeter than I expected. I look forward to continuing this series. Next up is SERGEANT’S CHRISTMAS SIEGE.

I’ve only read the first two books in this series by Ms. Crane. She also writes books  under the name Caitlin Crews. I have added many more books she’s written to my ever growing TBR pile. I can’t wait to read more of her books, no matter which name she uses!