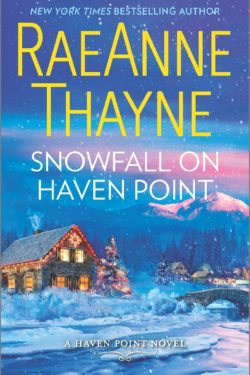 RaeAnne Thayne’s stories touch deeply in the heart and soul of family life. For those unfamiliar with the HAVEN POINT series, we get to know Andie Montgomery in the previous book, RIVERBEND ROAD. SNOWFALL ON HAVEN POINT reads easily as a standalone, but I recommend reading RIVERBEND ROAD first because I think you’ll appreciate what Andie overcomes in this book more if you’ve read her history.

Andie and her children suffered trauma that led them to restart their lives in Haven Point. They didn’t fully escape what they were running from, which means they’re all in a state of healing when this book begins. Andie seems a bit too perfect of a homemaker and mother in the beginning of the book. I wondered if it was a façade, or if she was truly so pulled together after what she experienced. Watching her develop as a strong woman who isn’t afraid to reach out for what she wants, even when fear should hold her back, says a lot about the love she has to give.

Marshall Bailey is battered by a hit and run driver so he’s laid up with injuries. His sister Wynona is away at college and insists that Andie see to Marshall’s comfort. Andie owes Wynona her life, so she pushes out of her comfort zone to help a man she barely knows. Marshall is grumpy with his circumstances. As sheriff, he’s normally active, so he’s annoyed that he can’t even work to resolve who tried to kill him. Andie’s offer of assistance and her adorable children wear Marshall’s gruff exterior down and we begin to see his heart.

I think what I enjoyed most about this book is Andie’s character transformation. I began to see her bravery and determination reveal itself in her interactions with Marshall. Andie seems timid and a pushover in the beginning. She surprised me with her spunk and resourcefulness. Marshall is the least likely man to draw Andie’s attention, so it’s fun to watch her test their budding friendship.

The only thing that seemed a bit off to me was Marshall’s lack of concern toward his life being threatened. He wants to know who tried to run him down, but he leaves his door unlocked and doesn’t seem to wonder if they’ll try something else. He might have been fully confident that he could protect himself, but it’s something I wondered about until his protective nature became more apparent with Andie and her children. Everything else about Marshall as a law enforcement officer is spot-on personality wise, so it could have been his confidence and lack of fear for himself that left him unconcerned about locking his door.

Andie’s children have a primary role in how she and Marshall relate to one another. The children’s simple approach to the holiday gives this couple no other choice than to spend more time together. I don’t think Andie or Marshal would have pursued a relationship as fast if it hadn’t been for the children’s influence. Those who appreciate cute children in a story will enjoy these young siblings.

A very sweet story trimmed with holiday traditions, SNOWFALL ON HAVEN POINT by RaeAnne Thayne will please fans and newcomers to the series.