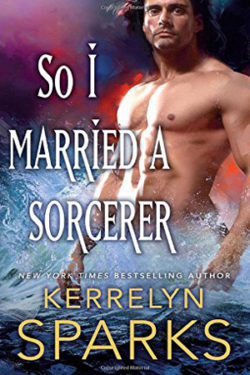 SO I MARRIED A SORCERER is an exquisitely crafted, mesmerizing adventure. The second book in the EMBRACED series is about Brigitta, who is one of the five orphan sisters at a convent on the Isle of Moon. The series is set in a new world with light from two moons. Babies born on the eclipse of the two moons are born with special powers. However, there is a death sentence for the innocent babes and some are brought to the island. Brigatta is embraced and is gifted with finding lost items. What does her future hold?

Brigatta’s adopted sister, Luciana, now a queen, is married to Leo, king of Eberon, and is about to give birth. Brigitta and her three sisters sail to visit Luciana, but their ship is over taken by the military. To her astonishment, Brigitta finds out she is a princess! The military states she is to leave with them because her half-brother, Gunther, king of Tourin, rules the military and declares she belongs with him. Only Gunther has evil intentions and the men look dangerous. What should Brigatta do?

Unexpectedly, scary pirates clamber aboard their ship! Brigitta decides to save her sisters, and boards the pirate’s vessel instead. Sister Fallyn goes with Brigatta as her chaperon. However, the captain is the infamous wind sorcerer, Rupert. Did Brigatta make a grave mistake?

Devilishly handsome pirate, Rupert, is a wind sorcerer who can control the wind. However, his goal is revenge on Gunther, king of Tourin and his sister, Brigatta, is now his hostage. Although, after meeting her, Rupert realizes his heart is telling him that he’s charmed by her. He realizes he can’t use her as a pawn in his vengeful plans. Brigitta also notices she should fear the scalawag but he isn’t a bit dangerous like the rumors she’s heard indicate. Actually, there is something extraordinary about him. He is hiding something but what?

SO I MARRIED A SORCERER is the funniest paranormal romance tale I have read in a long time! Brigatta is kidnapped by a dashing, rascally pirate named Rupert and oh my gosh, what a wild ride! The trip on Rupert’s ship is outright hilarious! With Sister Fallyn there to oversee the safety of Brigatta, humorous scenes abound! The author, Ms. Sparks, delivers with a deft hand magical sprinkles of humor throughout the already perfect plot. Rupert at first appears mean and cold. However, he is quite honorable, clever, strong, responsible, intelligent and exquisite eye-candy. Brigatta soon falls under his spell. There is an elusive allure about him that she can’t quite discern. Will Brigatta uncover the hidden depths to Rupert? Ms. Sparks perfectly plots a riveting read that has all the hallmarks of a superstar series. She writes with wisdom, emotion and intensity. Many subplots galore and the secondary characters are stupendous! My favorite parts of the story are when Brigatta is on board Rupert’s ship. It is outrageously funny! SO I MARRIED A SORCERER is a real treat and over-the-top action-packed. Breathtaking and sensual to the max!