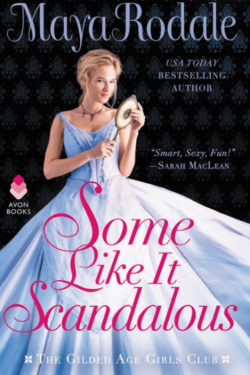 SOME LIKE IT SCANDALOUS, by Maya Rodale, is an engaging read. With this book the second in the  series, “Gilded Age Girls Club”, Maya Rodale delves into the gilded age in America. The late 1890’s so much was happening in America. The manufacturing age had begun. The new age of ‘royalty’ was making money from factories. Women’s suffrage groups were forming and starting to make the news.

This is an ugly duckling story. Plain Daisy Swann was given this nickname, Ugly Duck Daisy,  by Theodor Prescott the Third, when they were children. He was known as one of Manhattan’s Rogues of Millionaire Row. She’s hated him ever since.

Theodore’s father wants him to join the family manufacturing business. Theodore is flighty and kind of an air head. I didn’t really care for Theo in the beginning. He didn’t seem very smart, very “pretty” as the author notes, but not smart.

The family factory is not for him. After an outrageous scandal with some actresses, his father cuts off his funds and insists he marries and settles down.

Daisy has plans for a cosmetic company. Convinced that cosmetics are not just for ‘a certain kind of woman”, but should be available for everyone.

She doesn’t want to settle for a loveless marriage. When scandal threatens her family her mother and Theo’s father decide Daisy and Theo should marry.

Why not a fake engagement? This would keep their families from insisting they marry, and her and Theo would call off the wedding before it took place.

I love how Daisy and Theo actually become friends, and get to know each other through their fake engagement. Theo sees Daisy for the beautiful person she is inside and out. He asks her forgiveness for saddling her with the nickname.

Theo finds his niche is promoting and advertising and helps Daisy with her company. Turns out he isn’t flighty or an airhead. Daisy realizes she hasn’t given him enough credit in the smarts department.

Lots going on in the story. I really enjoyed the scene where Daisy attends her “ladies club” who are suffragettes. They try her cosmetics with trepidation.

I received ARC from Romance Junkies Reviews, for my honest review.