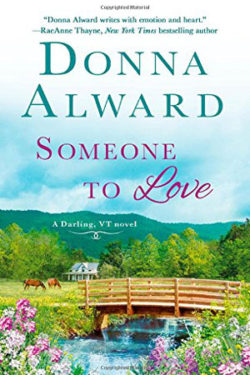 SOMEONE TO LOVE is the second book in the DARLING, VT SERIES and it didn’t disappoint. It was a quick read with lots of stories that all lead back to the Gallaghers and reunites us with characters we’ve met before. I already feel at home there and can’t wait to return to read SOMEBODY’S BABY, the third book in this contemporary romance series. I for one hope there will be many more books set in Darling!

There was darkness and light throughout the book. Ethan, a firefighter with two young boys, is a single dad after his wife’s death. He’s still reeling from her death and what it means for his family, and he’s bitter about it too. His large family doesn’t want to upset him and are careful around him. He’s always tired and grumpy but luckily has his family to step in and help with the boys and childcare when needed.

Enter Willow, who is the owner of the Purple Pig Cafe. She’s best friends with his sister, Hannah, and sister-in-law, Lauren. She’s truly a free spirit. They butt heads from the minute they meet, and it doesn’t get any better…or does it? He slings barbs then apologizes. They cross paths over and over again, and sparks start to fly. Trying to figure out what’s going on between them is tough enough, but add in Ethan’s children who adore her and his sister who’s being protective of both Willow and Ethan and things do tend to get interesting.

The story is filled with family, friends, romance and laughter. The community spirit of the town is almost a character in itself. There were some burn-up-the-sheet moments, and also times when Willow and Ethan both thought things were moving too fast, so one or the other would take a step back, which added confusion to their relationship. Willow was stronger than she thought, given her past. And Ethan had to reconcile who he was after the death of his wife. Watching them take one or two steps forward and just as many back was heartbreaking but made the story real. There was a happily-ever-after and nice closure but enough loose ends to bring us to the next story. Darling is a place I wouldn’t mind calling home!