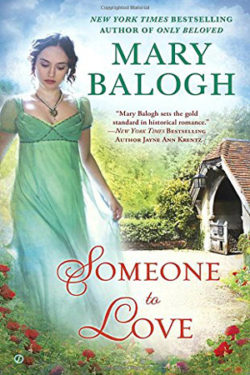 SOMEONE TO LOVE by Mary Balogh kicks off a new series about the Wescott family with some shocking revelations. Can this wealthy family withstand disaster when everything they’ve known changes after their father’s death?

Anna Snow has lived in an orphanage most of her life. She barely remembers the day she arrived there. As an adult, she has become a teacher and boarder at that same orphanage, reliant on her benefactor’s monthly payments for her survival. One day, a solicitor’s letter changes her life forever.

Avery Archer, Duke of Netherby, is bored most days with his responsibilities. He realizes it’s about time he took a wife, so he’s in London when his cousins are dealt devastating news. As the guardian of the Earl of Riverdale’s son, the heir apparent, Avery must advise when he’d rather let the young man sow his wild oats.

When Avery is called to a meeting in his own home by the earl’s solicitor, he realizes today is anything but boring. And, in his opinion, that is such a bother.

If you want a true experience with this novel, do not read the blurb. It’s much more fun to be surprised by the events in chapter four. I’m describing what happens until the end of chapter three so I don’t spoil the riot of revelations that happen in that next chapter.

Chapter four is brilliant and a glorious mess. Nothing is as it seems for this family and they’re about to find out how resilient they may be. I thought it would be my favorite part of this novel, but I continued to be entertained by humor and great characterization.

Avery Archer, Duke of Netherby, is a bore beyond reproach. Everyone is a little bit afraid of him, even though he’s not a large man. Avery exudes an aura of confidence, raising his quizzing glass and his eyebrows at the least provocation. I was very annoyed by his boorish countenance in the beginning and thoroughly entertained by him for the rest of the novel. Avery is beyond charming when he wants to be and the perfect match for Anna.

Anna is overwhelmed with her status, once she realizes she can’t go back to who she was. She’s not afraid, but she also doesn’t want the responsibilities pressed upon her when she preferred her life at the orphanage. That life was predictable and this new life certainly is not.

I know from experience that I can rely on author Mary Balogh to thoroughly entertain me. It’s why I requested this first book in the WESCOTT series for review. At first, I wasn’t sure about this story because Avery was so stuffy and so were most of the characters. Anna seemed so unaffected by her life at the orphanage that I wondered if she’d be the least bit interesting. Anna was poised beyond reason on the outside when faced with adversity, but never completely sure of herself on the inside. It was a joy to witness Avery and Anna falling in love because they needed the security that goes with believing someone truly cares.

The only thing that seemed a bit off to me was Avery’s special talent. I was more convinced by the end of the novel, but it’s inclusion is very different from Regencies I’ve read prior to this one.

Avery is such an oddball character full of personality. His mannerisms cracked me up, plus I wanted to slap him more than once. I could go on and on with quotes from his mouth. He had such memorable and entertaining dialogue, along with funny inner commentary. What tickled me most was Anna constantly telling Avery how absurd he was and she was right. He didn’t care that Anna thought that of him and I think that Avery was entertained by his own oddities.

Once again Mary Balogh has written the type of Regency romance that I love to read. Her characters come alive with larger than life nuances that keep me riveted to their story. I was sad when the book ended because I didn’t want to leave the characters before I knew everything about their future. I hope there’s more about Avery and Anna’s lives in the next novel because I can’t get enough of them. For pure entertainment, SOMEONE TO LOVE is a sure bet.