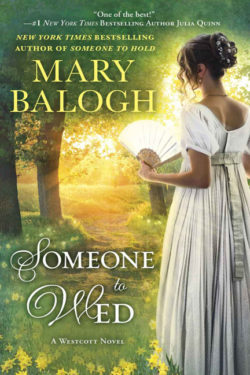 SOMEONE TO WED by Mary Balogh exemplifies her skills in characterization. I adored our heroine, Wren, from the very beginning, even though she was determined and overbearing. It was easy to see through her haughty behavior as a barrier she used as much as her veil.

Miss Wren Heyden inherits Withington House and her uncle’s glass factory, after the couple she claimed as her parents die within a week of each other. Considering herself a businesswoman first, she intends to buy herself a husband. Not able to attract one due to her facial disfigurement, she sets her sights on the Earl of Riverdale. He’s broke and needs the money. It seems like a perfect match – the rich heiress and the poor earl with a property to revamp. Apparently, Wren doesn’t know Alexander Wescott as well as she thinks.

Their initial meeting in reservedly hilarious. Alexander has not met anyone as direct as Wren. She, on the other hand, cannot understand his need for communication, socializing, and a courtship. He pushes, and she pushes back. Finally, Wren gives in to Alexander’s demands in hope that he’ll marry her.

Alexander puts up with Wren’s curt responses because he desperately needs her money to renew his broken-down estate. He cares about the people who live there and feels responsible for their welfare. I like that he sensed that there was something more to Wren than she let on. Initially, her money is his reason for pursuing their relationship, but it doesn’t take long for Wren to impress him as someone to love.

Wren has been a recluse most of her life. Her hideous birthmark forces her to wear a veil in public, giving her a mysterious air. She prefers to stay at home, but she will go to her glass factory as needed. Her aunt and uncle allowed her to withdraw from society when they became her adoptive parents. Alexander won’t stand for her reclusive behavior. He insists that any wife of his will learn her social duties.

I found Wren very entertaining. Her high-handed way of speaking was often very funny. She acted as if she had no feelings, but that was to cover up her very passionate core that truly cared what others thought about her appearance. Alexander was a good hero, but Wren was such an outstanding heroine that Alexander faded into the background for me.

One of the best parts of this book is visualizing the other characters we’ve come to love from this series through Wren’s eyes. There are some good chuckles, as well as heartfelt emotion.

Wren’s situation choked me up on page 137. My own emotion was sudden and unexpected. Author Mary Balogh has a true gift of making me love her characters. I get so wrapped up in their lives without even realizing it. The Westcott family are all so precious. I love their hearts.

I highly recommend the WESTCOTT series so far. I think you’ll enjoy it best if you read all three books in order. Start with Anna and Avery in SOMEONE TO LOVE, then read Camille and Joel’s journey in SOMEONE TO HOLD.

SOMEONE TO WED is the type of historical romance I love to read. It’s emotional and funny with characters I can’t wait to catch up with in future books. The Regency period is not my favorite style of historical. It takes a very talented author to draw me into this era without reservations. Mary Balogh has a unique talent that is mesmerizing. I can’t wait for SOMEONE TO CARE, releasing in May 2018!