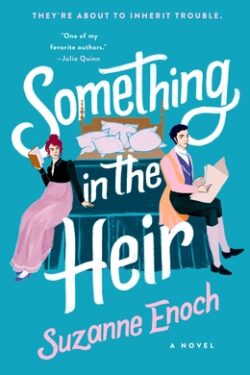 SOMETHING IN THE HEIR is a charming comedy of errors with some fluffy romance too. It stars brilliant, beautiful heiress Emmeline and politically, poised William Pershing. They are childhood friends that enter into a marriage of convenience, so Emmie can reside in her beloved childhood home, Winnover Hall. Her crusty old Grandfather stipulates that she marry quickly and produce a child within five years to satisfy the inheritance, so they can call Winnover Hall their home. Of course, there’s a hitch.

Her marriage with Will has been flawless, as Will advances his political career and Emmie controls the household and staff. Only, Will would love more romance in his marriage. It is eight years later and Emmie’s aging reclusive grandfather invites his relations to his birthday party. What’s Emmie to do? She invented two grandchildren named George and Rose. Will is shocked when he discovers his orderly wife fabricated two kids. Can they find two youngsters in time for the party?

They team up and borrow two rambunctious youngsters from an orphanage. They rename the brother and sister, George and Rose, who are the most disorderly kids ever! Emmie and Will have to teach them quickly the ways of the Ton. They work as a team teaching the kids and dealing with their poor habits. Plus, Will and Emmie’s fondness for each other grows into something more as they work together. Might there be romance in the air?

SOMETHING IN THE HEIR is crazy fun and insanely irresistible! William and Emmeline deal with two precocious children to fulfill an agreement for living at Winnover. Emmie’s fib blows out of proportion as two unruly kids with a penchant for stealing keep Emmie, Will and her whole staff on their toes! This is a delightful madcap romp with a little spice on the side. Ms. Enoch is a wonderful storyteller plotting quirky adventures with two smart-alecky kids and a dollop of dalliance in the tulips by Will and Emmie. Sheer enjoyment that sails right along! Want a breezy read with a hint of romance? SOMETHING IN THE HEIR is perfect escapist fare!