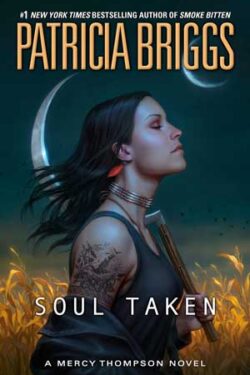 SOUL TAKEN is the next incredible book in the Mercy Thompson urban fantasy series by Patricia Briggs. This is the thirteenth book in this NYT bestselling series and should be read in conjunction with the others in the series. It’s not a stand-alone, as there are many characters from previous novels and character growth that can only be appreciated by having read the previous books.

In this installment, the mentally unstable and extremely powerful vampire Wulfe has gone missing. His mistress demands Mercy and her pack recover the vampire, or blame will be placed unfairly on the pack. Except Wulfe isn’t the only creature gone missing. Many half-blood fae have also disappeared, and Mercy can’t get a hold of Wulfe’s mistress or her vampire friends. And then there’s that horror movie about the Harvester that recently came out tying into people seeing an actual Harvester out and about. There’s something afoot, and it’s up to Mercy and her allies to find out what.

The magic–no pun intended–in this series stems from the relationships between Mercy and her friends and allies. This book answers several questions about mysterious characters who’ve previously made appearance, with more about Sherwood, Zee, Wulfe, and the vampire seethe. We also get to see Mercy’s relationship with her mate evolve. (That made me soooo happy!)

The story will blow you away! It’s filled with danger, mystery, and a touch of romance. The plot is so well done and the pacing is terrific. I couldn’t put the book down!

Patricia Briggs is a master at world and character building, and SOUL TAKEN is the latest gem in this best selling series.

Do not miss this book!