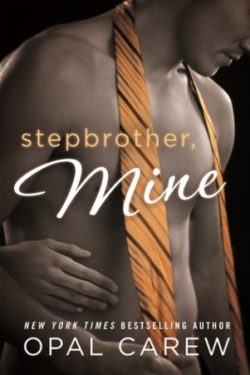 Dana’s dream of earning her master’s degree is put in serious jeopardy when her mother decides to cut her off financially. Strapped for cash and with only one asset worth parting with Dana opts to take the drastic action of auctioning off her virginity.  It’s not a step she takes likely and wonders if she’s doing the right thing but figures the only man she’s truly interested in is considered taboo and ‘family’ so who she gives her virginity to doesn’t matter.  Imagine her surprise when the top bidder turns out to be her extremely successful stepbrother, Mason.

Mason might be the head of his own company, have women lined up to be with him, and be ungodly wealthy but there’s something missing – the one woman he’s always wanted yet remains completely forbidden simply because his father married her mother. He’s stunned when he discovers she’s selling her virginity to the highest bidder and determined to teach her a lesson about doing something so drastic.  What he doesn’t expect is for Dana to stubbornly insist he fulfil his side of the bargain.

Mason’s intention to give her the money she needs with no strings attached is well intended but for Dana it’s the opportunity to have the one thing she’s always wanted – Mason loving her. Only Mason isn’t an easy lover – he’s Dominant and demanding and completely unsure if Dana can be the sort of lover he needs.  Of course, there are other issues that could arise due to their involvement with each other, is it a risk worth taking?

Opal Carew’s erotic romances are smoldering hot and at the same time emotionally captivating. With STEPBROTHER, MINE readers are introduced to Mason and Dana whose relationship is considered taboo (though honestly they aren’t related by blood so it shouldn’t make any difference).  As a reader you get glimpses of the relationship they cultivated before anything sexual came into play and felt emotionally pulled into their story.  I felt a lot of empathy for the young Dana as she’s neglected by her mother and clings to the kindness Mason shows her.  As an adult Dana shows strength of character that kept me smiling especially when it comes to convincing Mason to honor their contract. Ms. Carew incorporates suspense, love, friendship, sadness, family betrayal, scorching sex scenes, and characters who’ll charm their way into your heart into STEPBROTHER, MINE.  It’s a story that’ll have you eagerly abandoning real life for a few hours to immerse yourself in Dana and Mason’s romance.