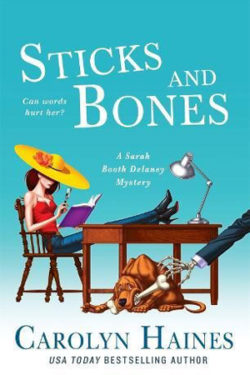 Sarah Booth Delaney is up to her old tricks sleuthing in STICKS AND BONES, the seventeenth book in the Carolyn Haines mystery series. Always eager to uncover the facts, Sarah and her partner Tinkie are up to their ears deciphering clues on a new case involving a tragedy in a rich family, the McFees, in her small town. The daughter, Sister McFee, is an author and wrote her memoirs which includes the story about her mom and brother drowning. Sister McFee isn’t the most hospitable person and rubs people the wrong way, including Sarah and Tinkie.

However, the book is optioned for a movie and a film crew comes to town. The director senses a back story to the tragedy and hires Sarah and Tinkie to uncover the real facts. The brother, Son, is suspected to have been on drugs when the car went off the bridge in a raging storm into the river with his mother in the car too. But Son’s body was never found, so investigating it will be difficult. Sister McFee states he was on drugs and the father, Colin, agrees as well. Throwing a monkey wrench in the works is the father, Colin, is running for Senate, and is determined to paint an unfavorable picture of Son, to secure his seat in office. Oh boy! Sarah and Tinkie have their work cut out for them!

It soon becomes clear, after shots ring out at Sarah and Tinkie, that someone isn’t happy with them snooping around. Danger is afoot and chaos reigns supreme. Who is the mystery shooter? Will Sarah and Tinkie dig up the dirt on the McFee tragedy before they are pushing up daisies?

STICKS AND BONES is a wonderful whodunnit with all the usual cast of characters including Sarah’s outrageous ghost Jitty. Great fun seeing the antics Jitty came up with this time. Sarah, Tinkie, and crew are irresistible with their quirky, endearing personalities, smarts and zany banter. They are all knee deep in southern roots this time investigating an affluent family, the McFees, who are running a fowl of the law. Sarah is like a dog with a bone when it comes to solving cases. Will Sarah and Tinkie keep their cool dealing with nasty Sister McFee whose personality is more sour vinegar than honey? Sister tries their patience and they suspect she might have had something to do with the drowning. The author even sneaks in some romance between Sarah and her boyfriends. What fun! Ms. Haines does a spectacular job of holding back important clues until the very end. I was very tempted to peek to see who did it, but I waited and happy I did! A superb ending! STICKS AND BONES is a fast-paced, well-plotted mystery filled with heart-warming charm. A good time!