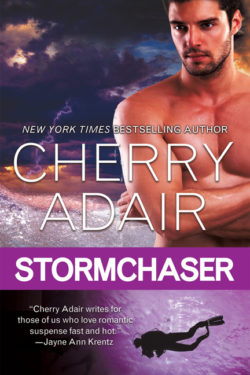 In Cherry Adair’s romantic suspense, STORMCHASER, Jonah Cutter is an undersea treasure hunter. His family business is salvaging ships lost at sea eons ago, and if there is a treasure to be found, he wants to be the one to discover it. He believes he has found something special…something so special, it is unbelievable and would change the history of the world if true. He needs scientific examination of his findings that will either prove or disapprove his theory. Jonah has hired famous marine archaeologist Dr. Calista West to verify his findings before going public.

Dr. Calista (Callie) West has come aboard Jonah’s salvage ship, STORMCHASER, for one reason. She wants revenge against Jonah for actions she believes his family has taken against her brother-in-law, another treasure hunter, which resulted in almost ruining his own undersea salvage business. She plans on informing her family what Jonah has discovered in hopes they can interfere with his salvage operation, leaving Jonah and his family out in the cold.

Callie soon has a big problem. Jonah is not the creep she thought he was. He is also hot, hot, hot. Her husband died four years earlier, and this is the first time she has been so attracted to someone who shares her passions. She did not expect to have these feelings and does not know what to do. She let everyone on board the ship believe she is still married in order to not get personally involved with them, but Jonah is creeping his way into her heart. Callie is so captivated by what Jonah has discovered beneath the sea, she wants to continue to explore the operation, yet she doesn’t want to betray her family.

Jonah can’t believe he is so attracted to Callie. He never mixes business with pleasure, but he can’t stop thinking of her. There is also one big problem–she is married, and he doesn’t get involved with married women. She is driving him crazy in so many ways. She is so smart, and as they start to find and recover amazing artifacts from beneath the sea, he becomes more intrigued by her knowledge, experience, and passion for history. Keeping his distance physically is becoming harder each day, and he realizes his feelings for her are running very deep.

Will Callie come clean on who she really is and why she is there? And can Jonah forgive her deception? There are also some very strange things happening around this salvage. Weather anomalies, strange artifacts, and a supposedly uninhabited island nearby that now has people living on it who are very interested in what they are doing. What is going on?

Cherry Adair has created a story containing lots of action, adventure, and danger in STORMCHASER. Of course, it would not be a Cherry Adair story if it also did not include some very hot, intense romance.  This was an exciting read.