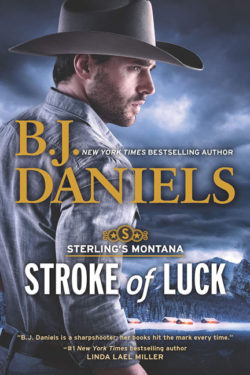 B. J. Daniels’ STROKE OF LUCK is the first book in the STERLING’S MONTANA series, and I’m looking forward to reading more of this series. Although the story is choppy at times, it’s a whodunit with many murders that kept me guessing, even with the small cast of characters.

Will and his brothers inherited the guest ranch and cattle ranch after their father died.  Will has taken on the responsibility for the guest ranch, but nothing is going right so far.  An old family friend wants to have a retreat there for some of his employees for bonding purposes. It’s before the season normally begins (due to the changeable weather), but since it’s for Big Jack, who was a friend of his father’s, Will gives the okay. Things go downhill fast. When Will needs a temporary cook, he hires Poppy, who had a crush on him when they were younger. She moved away, and though twenty years have passed, neither has forgotten the other.

There are twists and turns to the story along with some major surprises and a lot of descriptions of the ranch and the interactions between the guests. Undercurrents of Poppy and Will’s attractions are throughout the book, but the couple never seems to be on the same page.

As things come to a head, we’re kept on our toes with all the crimes being committed.  With the major snowstorm that hits, the ranch is cut off from everyone, and the town and suspense grow more dire. There’s a lot of action and danger as we figure out who’s behind everything. As the motives are revealed, things click into place. There is ultimately a happily ever after, and it was nicely tied up in the epilogue. At the end of the book there are some dessert recipes as well as an excerpt from the next book in the series, LUCK OF THE DRAW.  I look forward to reading it.

B. J. Daniels is an author whose books I’ve enjoyed, but I couldn’t connect to STROKE OF LUCKY as well as I’d hoped.