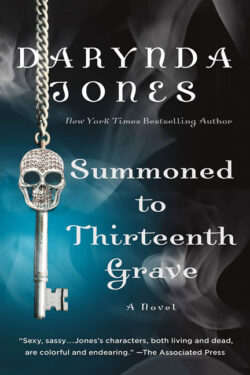 This is the 13th and last book in the series. I haven’t read the other books, so there were times that explanations about the relationships between the characters were confusing. Charley and Reyes have a whole lot of history between them, and between her being THE Grim Reaper and him being a demon, there have been many clashes as they fell in love and married. They have a young daughter who is destined to lead the side of good in a final battle versus evil. But they’re too busy fighting evil in the present to be able to raise her. So the human parents who raised this incarnation of Reyes are raising his more-than-human daughter.

What I enjoyed the most was the author’s amusing tone. Charley has nicknames for body parts—hers and other people’s. She has nicknames for all of their friends, who all have quirky backstories that are only briefly alluded to. And the passion that burns between her and Reyes is hot enough to melt sand into glass! (Don’t ask, just read the book.) The challenge in this book is that a rift has been created between hell and earth, and demonic entities are rushing through to inhabit the bodies of living humans, turning them into zombies before they die. Charley and Reyes discover it was their actions that caused the rift, which will destroy the entire world in three days. Since Charley has just returned from a century in hell, she’s upset that she doesn’t have much time to enjoy being alive again, before she has to jump into saving the world—again.

The story was engrossing and entertaining. My only beef is that since this book is the last in the series, it’s assumed that you’ll have read all of the other ones, so I was missing the backstories to all of the characters. But still, I enjoyed reading this book. The conclusion doesn’t really seem to be much of an end, so there may be a future for the characters—just not in this series.