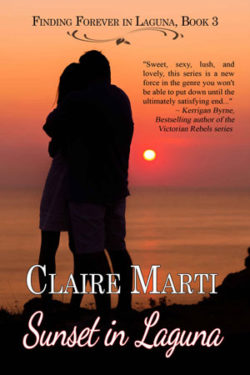 Former Major Christian Wolfe owns and operates a wine bar in Southern California. He struggles daily to keep his PTSD secret from his friends and family. Then temptation in red stilettos re-enters Christian’s life. He reluctantly accompanies Kelly to an organization that adopts dogs out to veterans. Christian cannot help but fall in love with an ugly yet persistent pug, who eases his anxiety. Can Christian overcome his issues? Or will his PTSD ruin a possible relationship with Kelly?

Kelly Prescott is the only daughter of a wealthy corporate attorney. She leaves her father’s firm to accept the general counsel position at a nonprofit veterans’ organization. Kelly encounters the broodingly silent Christian in front of her workplace. She remembers him from her past visits to Laguna, California. Kelly wants to explore their shared attraction. Can Kelly convince Christian to give her a chance? Or will the infuriating man continue to keep her at a distance?

Christian is such a delicious wounded hero. I understand his need to downplay his PTSD. He is aware there are veterans who are worse off than him. Also, he does not want to worry his friends and family with his troubles. I love how Christian took to Olive the pug. He may have been reluctant at first, but he soon recognized the relief the little dog gave him. My sister-in-law had a male pug named Oliver, so I envisioned him as I read Olive’s parts. What I adore the most about Christian is his enjoyment of books. He works out, but he also understands the escape books can offer to people.

I liked Kelly instantly. I admire Kelly’s sense of ethics. She could no longer stomach representing immoral companies, who would rather hurt people than help them. Instead, she finds a job that allows her to help those in need. I like Kelly’s persistence. She did not give up on Christian, even after seeing him at his worst. Also, she refused to let him keep her at a distance. What I like most about Kelly is how she never once saw Christian as wounded. She didn’t like anyone, especially her best friend, to refer to him as such.

SUNSET IN LAGUNA is book three in Claire Marti’s contemporary romance series, FINDING FOREVER IN LAGUNA. Sadly, I have not read the prior two books in the series, yet that did not interfere in my ability to follow the plot or storyline. The story can definitely stand alone. However, the couples from the previous books make frequent appearances throughout the story. I love the dog element. I am a sucker for books with canines in them.

SUNSET IN LAGUNA is a positive tale that proves anyone can overcome their inner demons to find happiness and love. It is a shame there will be no more stories set in the gorgeous Laguna, California, area.