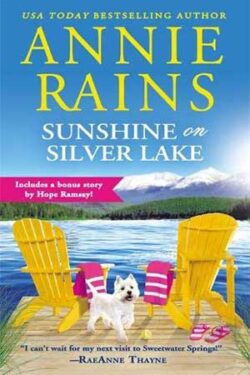 SUNSHINE ON SILVER LAKE is the fifth book in the SWEETWATER SPRINGS series, and I’ll be back for more since I’ve missed some books along the way. It was nice to be back in Sweetwater Springs, a small town in North Carolina where gossip abounds. Emma owns a coffee shop, and Jack is a park ranger. They’ve known each other forever since their mothers were best friends.

Jack’s home life was not the best thanks to an alcoholic father. Jack and his sister, the mother of fifteen-year-old Sam, have had their share of abuse and addictions. Emma lost her mother to cancer when her mom was thirty, and it’s making her anxious as she reaches that same milestone.

When Emma is given a box of her mother’s things and decides to honor her, she enters a turning point in her life. She and Jack continue to be drawn together, and both seem to want more than the friendship they’ve always shared. The book ends nicely, along with a few loose ends which will hopefully be resolved in the next book, SEASON OF JOY.

There was a bonus novella included—Hope Ramsay’s A FAIRYTALE BRIDE. This is the prequel to the CHAPEL IN LOVE series, of which the first book is A CHRISTMAS BRIDE. In A FAIRYTALE BRIDE, Jeff and Melissa come together in whimsical and heartwarming ways. Jeff is doing all he can to help Melissa keep open the used bookstore she inherited (from her grandmother who raised her.)  There are a few laugh out loud moments in the story along with a satisfying, lovely romance. A fun read.