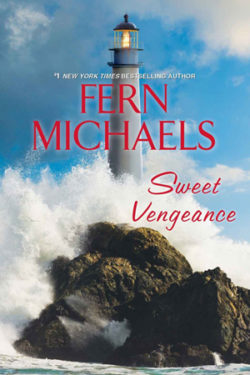 Imagine coming home and finding your husband and two children murdered. Then imagine being accused and convicted of committing the crime knowing you had nothing to do with what happened.

SWEET VENGEANCE is the story of Tessa Jamison, a young mother who has spent the last several years in prison, now being released because of a technicality in her court case and is awaiting retrial. She is forced to stay in the home where her family was murdered while being threatened by people on the outside who believe she is responsible for what happened.

What Tessa knows is this—she did not murder her family. Her goal is to try and figure out what happened and bring those responsible to justice.

Fern Michaels created a character that I felt such compassion for. It is heartbreaking to learn what Tessa has gone through, what she has lost, and what she will never get back. When I finally learned what happened, I was surprised, but I also felt such relief that justice had finally been achieved. I have never been disappointed by a Fern Michaels book and this is no exception.  A great read.