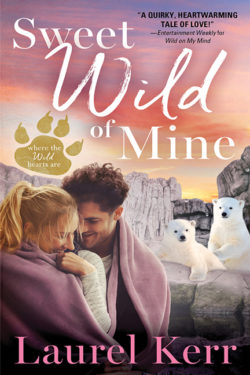 I loved being back in the setting of the Sagebrush Flats Zoo with SWEET WILD OF MINE, the second book in the WHERE THE WILD HEARTS ARE series. We are reunited with both characters and animals we’ve met before in the first book in the series, WILD ON MY MIND, though this book can easily be read by itself. This story revolves around reclusive Scottish author, Magnus, and June, a tea shop owner and jam maker.

June is taking care of her grandmother, or Nan, as she calls her, and it’s getting tougher. Nan is becoming frail, scared, and forgetful. Nan is English and has fond memories of Scotland, where she met her American husband.

Magnus’s memories of that area are unhappy ones. His mom left when he was just a young boy, and his dad was abusive and ridiculing. He’s not used to affection or communicating with others due to his stutter, but when he meets June, sparks fly.

Magnus and Nan hit it off since they have a shared connection to Scotland. He’s trying to write his next book and volunteers at the zoo since he has a background with animals, especially polar bears (and the zoo is set to get a baby one.)

There are a lot of stories surrounding the animals, who all have personalities and act as if they understand everything said to them. The characters didn’t have the depth to them that I expected, and I found June hard to like. However the plot and vivid descriptions of the setting made for a fun-filled, vibrant story. There is nice closure, especially with the epilogue and a lovely happily ever after.

I’ve enjoyed the two books in this series and look forward to reading more books by Ms. Kerr.