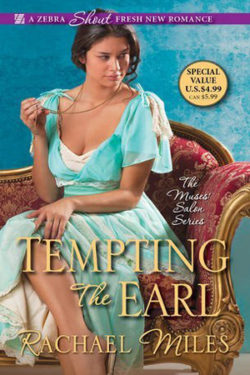 Abandoned bride, Olivia Walgrave, Countess of Levesford, has been running her husband’s estate for six long years, while he chose to leave her for the Continent to protect England from the threat of war. When the Earl finally decides to return home, he discovers that the mild-mannered girl he thought he left behind to enjoy the comforts of the country was really a woman of intrigue whose secrets are part of a greater mystery that needs to be unraveled.

TEMPTING THE EARL is part of Rachel Miles’ collection titled “Muses’ Salon.” This title tells the story of Harrison Walgrave, Earl of Levesford, recently returned from serving a secret mission on behalf of England’s Home Office. He’s making his way home to visit his wife, Olivia, who harbors her own secrets that she would rather not be discovered.

Olivia has managed to maintain her husband’s lands and accounts, while satisfying her own intellectual needs by secretly authoring a series of newspaper columns that cast serious doubts on the direction the English government is heading. On a more personal note, she has even secretly authored a book about the woes and triumphs of “The Deserted Wife” and occasionally disguises herself so that she can perform on stage–all things no proper lady would ever consider doing.

As the reader learns more about why Harrison left to defend his country, you also learn, as he does, just how remarkable the woman he married is and how truly little he knew about her. This book wonderfully tells the tale of the joy of discovering that person who you thought you had so little in common with, is now the person who is completely etched inside your soul. The one person who you suddenly realize you cannot live without. Ms. Miles expertly weaves those waves of discovery, culminating with a crescendo of passion that are not to be missed.

As the mystery that is Olivia Walgrave unravels in each chapter, the reader becomes more invested in her story, wanting more of her life to be revealed. As each new piece of the puzzle is placed, the message is clear–TEMPTING THE EARL truly fulfills a reader’s need for intrigue, romance, and a happily-ever-after.