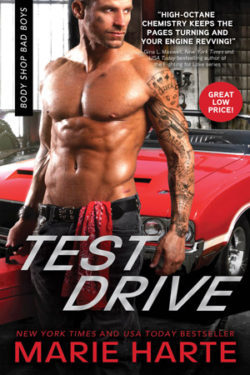 Growing up in the lower middle class, Lara Valley wants escape more than anything, so she started making plans for her future while she was still in school, plans that changed as the years went by. Currently working in a bar and taking classes to get her nursing degree, Lara does not have much time for a social life. But she does have one rule – no dating the guys who frequent Ray’s Bar, where she works. Still, she cannot deny that she is sorely tempted by Johnny, who often asks her out, even though she has turned him down every time, so far.

Like the other reformed bad boys at Webster’s Garage, Johnny Devlin is used to living fast. When he was younger, he went to jail for stealing cars, but Johnny learned his lesson and for the past seven years he has been working as a mechanic, a job he enjoys. Unlike his father, who owns a strip club and goes through one woman after another, Johnny is not a player, even though women are attracted to him. But growing up with women constantly coming in and out of his life, Johnny doesn’t put much worth in himself. For more than four years now he has been trying to get sexy bartender Lara to go out with him. Even though he helps his father out at the club, the women there are more like his sisters, so asking them out is the last thing on his mind. The only woman who interests him is Lara and when he witnesses her being manhandled by her soon-to-be ex-brother-in-law during her break, he sees red. After Johnny comes to her rescue, she thanks him by asking him out on a no-strings-attached date. One date leads to another as their attraction heats up between them and Johnny finds himself falling in love. Can he convince her to take a chance on forever with him, or will issues from his past interfere with any future they may have together?

Hot, Hot, Hot! TEST DRIVE, the first book in author Marie Harte’s BODY SHOP BAD BOYS series, is a sassy, sexy contemporary romance that turns up the heat. The chemistry between Johnny and Lara is explosive. I enjoyed the way that their relationship evolves as they learn more about each other and their romance is allowed to blossom. The secondary characters are a hoot and had me laughing quite often at their good natured banter with each other, captivating me from the very beginning.

TEST DRIVE is a wonderful start to a promising series which centers on the bad boys at Webster’s Garage; Johnny, Foley, Sam and Lou and the women they love. The characters are realistic with all their flaws and vulnerabilities, as well as their strengths, giving readers a chance to identify with them and perhaps fall a bit in love with these wonderful individuals. As a spin-off of the MCCAULEY BROTHERS series, this book also includes appearances of some of those characters as well as introducing some new ones, which will delight fans of Ms. Harte’s previous novels. The end of this story will leave readers yearning for more as the groundwork is laid for the next installment of this series, ROAD ASSISTANCE, which is due to release in September 2016. Pure delight! For readers who enjoy contemporary romance with plenty of heart, heat and humor, TEST DRIVE is a must read.