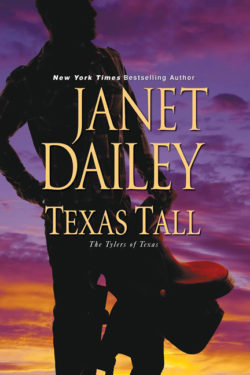 In TEXAS TALL by Janet Dailey, Will Tyler is a proud man. That pride has allowed him to run Rimrock Ranch successfully over the years, but it has also been his downfall in his marriage to successful lawyer, Tori Tyler. Tori has moved on with her life, beginning anew with a man who is completely unlike the gruff, bossy, and unwavering Will Tyler.

The two have shared an awkward truce because of their daughter, Erin, but many issues remain unresolved between them. Those issues are brought to the forefront when in a quick act, Will kills a man in self-defense and finds himself on the receiving end of Stella Rawlins’s wrath. Stella’s brother is now dead, and she wants nothing more than for Will and his dynasty to crumble. She’ll stop at nothing to make sure that happens and will ruthlessly use whatever resources are available. No one is safe.

Tori is now the defending lawyer for her ex, Will, in a battle that she is determined not to lose. She will defend Will with every ounce of her being because of their daughter. But Tori doesn’t have any defenses against the rekindled attraction that is growing, despite her desire to keep that door firmly closed. As the trial draws near, Tori is faced with a tough decision–should she bring her family back together for the sake of Erin, or take a chance on a new life with the man who has been patiently waiting on the sidelines?

Janet Dailey has created a dynasty with her new series, The Tylers of Texas. In TEXAS TALL (book #3), the story of Will Tyler is intertwined with Dailey’s first two books of the series: TEXAS TRUE and TEXAX TOUGH. Readers who have followed these books will love being able to continue the stories of Sky, Lauren, Beau, and Natalie.

Dailey beautifully molds the world of Rimrock Ranch with its stark landscape and lovable characters. The antagonists in the story are just as powerful, creating the perfect effect of good vs. evil with plot twists thrown in for good measure. This is a story that will keep the reader captivated all the way to the end.