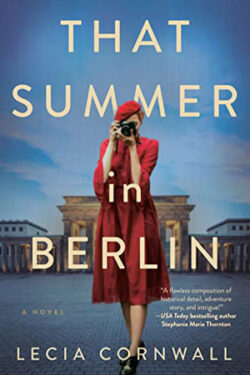 THAT SUMMER IN BERLIN is historical fiction that was often difficult to read given the subject matter of Nazi Germany in 1936. But the story is well written and very descriptive. The book is broken into four parts and takes place in England and Germany and begins in the fall of 1935.

This is Viviane Alden’s story. She’s a photographer who has a phenomenal eye for taking pictures to expose the truth of what’s going on around her. Many of her pictures are published in the newspaper anonymously, and she seems to be making a name for herself with those in the know. Journalist Tom Graham is a bastard whose father is of the aristocracy, though they don’t have a relationship. He’s taken with Viviane when they initially meet under strange circumstances. They also meet unexpectedly in the streets of England when she is photographing demonstrations that he’s covering for his newspaper.

When she goes to Germany with her stepsister, Julia, to stay at Julia’s godfather’s home, it’s as much to get away from another suitor. She takes pictures to show what’s really going on in Germany at Tom’s suggestion, since he’s been given an assignment there, though his is to write positive stories no matter what he feels and believes.

There’s a lot of darkness to THAT SUMMER IN BERLIN. Viviane sees it through the camera lens, and it’s difficult to know who is aware of what she’s doing. She’s not just taking pictures of places of interest as a tourist. Also, Julia is there to try and find a husband since her godfather has three sons—two of which are of marriageable age.  There is definitely some romance depicted.

The Summer Olympics set in Berlin in 1936 play a prominent role. There are carefree times—or what seem to be—as well as terrifying and scary moments. Not everyone Viviane meets are as they seem, and some have hidden agendas that could get them all killed. She’s a quick thinker and manages to get herself out of a few difficult positions. She also gets support from some surprising people. There are a multitude of supporting characters woven throughout that add layers to the story.

The ending is somewhat magical, taking place back in England in 1940 and gives nice closure. The cover is wonderfully depicted. The Acknowledgements and Notes in the back of the book are fairly lengthy and give some insight into the story. The Readers Guide Discussion Questions are thought-provoking.

If you like historical fiction set around WWII with a bit of romance and based in part on real events, this is a book you’d want to read.