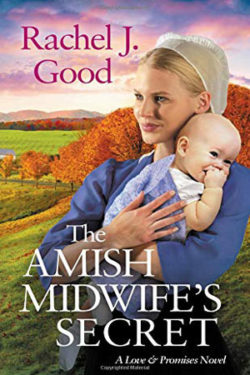 THE AMISH MIDWIFE’S SECRET is the second book in the LOVE AND PROMISES series, and it was nice to be back with some of the characters we met before. While I wasn’t as emotionally invested in this book, it was a heartwarming read with some romance along with discord.

Leah is Amish and studying to be a midwife but can’t get her certification because the Amish do not believe in higher education. Her parents deal with her calling as best they can but aren’t happy when she tends to make it a priority over some of her other responsibilities.

Ben, whom she is to marry someday, doesn’t want a wife who works outside the home.  All is not rosy with their romance. Enter the Englisch doctor, Kyle, who has higher aspirations. But Kyle is currently helping out the elderly local doctor who makes house calls and whose practice is made up of both Amish and Englisch patients. Leah and Kyle have an immediate attraction. Their chemistry is off the charts, but neither one can do anything about it since they come from two different worlds, or so they think.

There are many twists and turns to the story, along with more confidences than just the midwife’s secret. We learn of Kyle’s past and about his brother, Caleb, from whom he’s estranged. Leah’s brother, Joel, has been shunned because he turned his back on the church, but his inclusion in the story is touching and very moving. There are many plot lines going on at once, but they all meld together neatly and there is a nice flow to the story. The characters have a depth to them. There is nice closure but also a lot of loose ends, which I hope will bring us to more stories in the series.

Ms. Good is a fairly new-to-me author, having only read the first book in this series, THE AMISH TEACHER’S GIFT, and her story in the anthology, LOVE’S CHRISTMAS BLESSINGS. I will be back to read more of her books since I enjoy Amish stories and read books by other authors who write them.