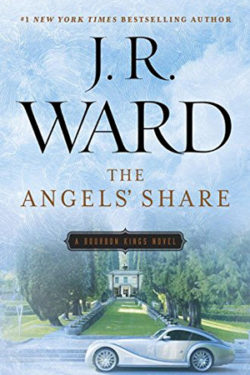 THE ANGEL’S SHARE, the second book in THE BOURBON KINGS series picks up right where the first book left off: William Baldwine is dead, the Bradford Bourbon company is in shambles, and Lane is left to figure it all out. His father’s apparent suicide comes into question with his eldest brother Edward as the prime suspect, and the amount of money his father actually owes is more than anyone could have ever conceived. The staff all either has an opinion or is involved in some way big or small; the upstairs downstairs feel of the story gets a bit messy due to the involvement of Lane and Lizzie and the suspicions surrounding William Baldwine’s death.

The family dynamics between the siblings is charged with being raised with an embezzling cheating father and a crazy, mostly absent mother. Gin is marrying for money, her daughter has come home to teach her a lesson about family at the most inopportune time, and their long lost brother Maxwell shows up in the middle of all the chaos, and we are not sure why…yet. It’s just a mad, mad world.  Ward creates a world filled with intrigue amidst the class system still evident in the Kentucky bourbon society.

This book was not what I expected.  As a romance reader, I had expected this book to be Edward’s story. I was surprised to see that it picked up right where it left off from The Bourbon Kings and mostly from Lane’s point of view. But after getting over this initial shock, I got lost in the world of the Baldwine-Bradfords and fell in love with what I love most about J.R. Ward’s writing: her ability to create webs of characters that connect from one story to the next. The characters are so well created that the reader wants to know what is going on with each of them. I am waiting with baited breath for the 3rd book in the series THE DEVIL’S CUT.