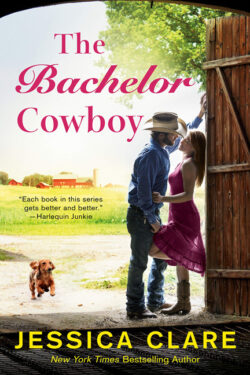 THE BACHELOR COWBOY did not disappoint as the cowboys seem to get more swoon-worthy as the series progresses. It’s the sixth book in THE WYOMING COWBOY series, and it is hot, hot, hot. We are reunited with characters we’ve met before, along with the small town of Painted Barrel, but this is Layla and Jack’s story. Jack, along with his brothers, has moved to Painted Barrel from Alaska. Layla is an accountant for the masses. When she bids high on him at a bachelor auction, for a charity of course, she sets tongues wagging. He’s been attracted to her since their paths first crossed, but she seemed to look right through him.

As their relationship builds after their first planned date, things go off the rails in other areas of Layla’s life. Namely, anything that has to do with her mother—a nasty piece of work who’s also a narcissist.

It was fun to watch Jack and Layla’s relationship build, especially when Jack agrees to take things slow until she’s comfortable. Neither realizes how invested the other is in the relationship, but it’s eye-opening when they do.

There are multiple storylines being told that work together. Jack’s relationship with his uncle, his brothers, and their significant others enriches the story. There’s a lot of ranching going on and a dog that Jack and Layla care for together. Layla has an unusual hobby that is highlighted more than once.

The romance is satisfying, the descriptions vivid and the emotions warming. Layla becomes part of a whole new world, and her growth is satisfying. The story has a nice flow to it, and the epilogue that takes place three months after the story ends feels right. I look forward to reading the next book in the series, HOLLY JOLLY COWBOY.