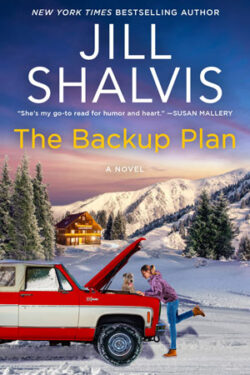 Alice Moore discovers she inherited one-third of an old inn from her hometown. The place holds such bittersweet and painful memories for her. Alice is forced to stick around and help her two partners – her former best friend and her teenage crush – renovate the place. They decide to make a list of rules to follow while working on the inn together. Alice cannot seem to shake the attraction brewing between her and Knox. Secrets from the past threaten to break their fragile truce. Can Alice ignore the past to reconnect with Lauren and Knox? Or will she balk at the first sign of trouble?

Knox Rawlings owns a general contracting company in Seattle. He learns that he inherited one-third of an old B&B inn in Sunrise Cove, California. Knox intends to honor his late benefactor’s wishes and renovate the place to its former glory. He just needs to convince Alice to remain and help in the restoration process. Knox is ready to put the painful past behind him. However, long dead secrets resurface and threaten his and his partners’ peace-of-mind. Can Knox convince Alice to confront her inner demons? And what backlash will the past have for the three? Can they overcome it?

I adore Alice’s name. It holds a special meaning to me because it was my late grandmother’s name. I always get excited when I see it in books, which is not very often. I like how Alice has three quirks that are reminiscent of my grandmother. Spunkiness, swearing like a sailor, and knitting. Although, my grandmother crocheted instead of knitting (almost the same thing), and she only swore when angered, which was rare. I want to thank the author for bringing back happy and loving memories of an important person in my life, who I miss greatly. What I adore the most about Alice is her feelings towards animals. She has a soft spot for them, including rodents.

Knox is such a sweetheart. He has had a crummy childhood, growing up with an alcoholic parent. Something I identified with. I like how Knox and Alice have quite a lot in common. They both have lost someone important to them, and they both are afraid to open-up to others. What I love the most about Knox is how he encourages Lauren and Alice to mend their relationship. He does not know what caused the rift between them, but he knows they need each other.

THE BACKUP PLAN is the third book in Jill Shalvis’ contemporary romance/woman’s fiction series, SUNRISE COVE. This story can be read separately from the previous two. The only thing the three books have in common is the setting. There is no on-going plot or recurring characters. I like how Jill Shalvis touches on real-life issues such as personal loss, alcoholism, alienation, etc. She breaks the seriousness with snarky and sometimes light hearted humor.

THE BACKUP PLAN is an uplifting tale of finding acceptance, self-worth, and absolution. I could not put this book down and flew through the pages. Jill Shalvis writes such poignant stories filled with humor. I never tire of them. I cannot wait to visit Sunrise Cove again in the next installment.