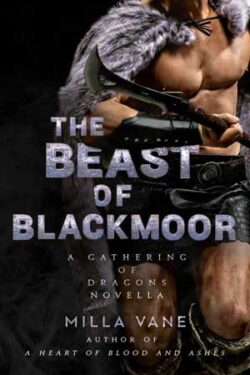 Mala is second in line to Krimathe’s throne. She is also one of Vela’s chosen, a person who seeks the goddess for a sacred quest. Mala’s task is to tame the Beast of Blackmore. The goddess’ quests are never easy, a fact Mala acknowledges until she meets Kavik. Can Mala successfully tame Blackmore’s beast? Or is she doomed to fail not only her goddess but her people as well?

Kavik wants to free his homeland from an evil warlord’s tyranny and a demon beast’s taint. His dreams are plagued by a mysterious woman. When Vela’s chosen arrives at Blackmore, Kavik knows his end draws near. However, he never thought the warrior would be the woman from his dreams. Can Kavik liberate his people from both the warlord and the demon? Or will he be enslaved once more?

Mala is everything that I admire and like in a heroine. She is a proficient warrior, one who acknowledges her abilities, strengths, and weaknesses. I adore Mala’s compassion. She may be a princess, but she refuses to watch those weaker or lower class suffer injustice. I love Mala’s ability to stand up to male opposition. She is not intimidated nor cowed by men’s posturing. What I like the most about Mala is how she treats Kavik. She recognizes a tortured spirit, so she deals with him with patience and stubborn will.

Kavik is such a delicious wounded hero. His life has not been an easy one. He has endured nearly every kind of horror and travesty a person can suffer. I love how Kavik never once gave up on Blackmoor nor its people. He has tried numerous times to usurp the warlord and demon terrorizing them with no success. What I like the most about Kavik is his altruism. He tries to spare his people pain by keeping them at a distance. Kavik does not want others hurt because of him.

THE BEAST OF BLACKMORE is a prequel to Milla Vane’s high fantasy, barbarian romance series, A GATHERING OF DRAGONS. It is also a part of the NIGHT SHIFT anthology. This story touches on the darker side of fantasy. So, anyone sensitive to violence, rape, sexual assault, and abuse should be wary. I love this series. It satisfies my high fantasy needs short of FORGOTTEN REALMS and DRAGONLANCE, two venerated fantasy worlds inspired by tabletop games.

THE BEAST OF BLACKMORE is a riveting tale of two people overcoming their emotional obstacles during a chaotic time. This novella is a great place holder to tide fans over until the next full-length installment. I cannot wait to see who is next.