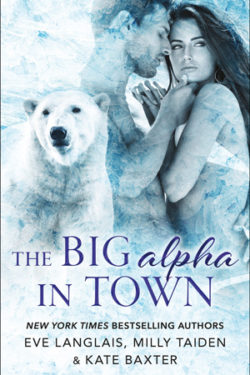 THE BIG ALPHA IN TOWN contains three stories by Eve Langlais, Milly Taiden, and Kate Baxter about some seriously sexy shifters who are a lot of fun.

In BEARING HIS NAME by Eve Langlais, Ark receives a letter informing him he is about to become a father. He doesn’t remember the woman he’s supposed to have impregnated, so figures he’d better figure out what is going on. Now things get interesting. He doesn’t remember the woman in question, although they attended the same party, and he did get a little drunk at the time. When he arrives at her house to confront her and learn the truth, he discovers her sister is the one who sent him the letter. And worse, she’s his mate!  What’s a bear to do?  .

In Milly Taiden’s OWNED BY THE LION, a man’s had his eye on his mate for years.  However, she is the best friend of his little sister so he has always kept his distance.  Now she’s grown up, and other men are taking notice. No way is he going to back away. She is his. He just has to convince her of that fact.

In NO NEED FUR LOVE by Kate Baxter, Owen and his wolf pack move to a small town in Idaho where they can run wild and free. The only problem is there are hardly any females, which makes for a very lonely werewolf. One night, Owen meets Mia, a sexy wood nymph, and immediately knows she’s his mate. But she disappears after a hot night spent together. He has to find her but knows nothing about her. So begins the search.

I enjoyed all three stories. These shifter stories are such fun and do not disappoint!  A great summer read.