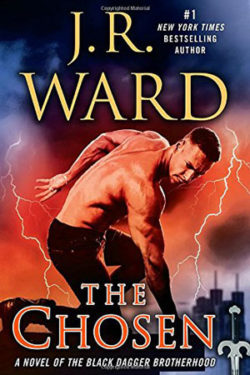 THE CHOSEN is Layla and Xcor’s book in the Black Dagger Brotherhood series. Layla is one of the Chosen now living with the Brotherhood. Layla bore Quinn’s children during her Needing, and they are now parents to twins. As happy as Layla should be, she decidedly is not happy. Her thoughts are consumed by Xcor, the leader of the Band of Bastards and attempted murderer of Wrath, the Blind King. As Layla, Quinn, and Xcor navigate what it means that Layla knowingly went to Xcor while pregnant, there is so much more going on in THE CHOSEN.

As with all Black Dagger Brotherhood books, there is a lot going on besides the complicated path of the book’s primary couple. We have many threads that take off in several directions. Some intersect and some run parallel to the plot. We still get the everyday actions of the entire clan with cameos of the Brothers and their shellans (wives/mates). Even though there are multiple plot lines, I did not ever feel like they overshadowed Layla and Xcor.

THE CHOSEN draws the reader in from the start. This story, just as the previous books  set in the Black Dagger world, is intense, emotional, and hard-hitting. Emotions are everywhere and hit the full spectrum from palpable love all the way up to uncontrollable rage. The romances are never easy with J.R. Ward, and there is always conflict, internal and external. I always end up with some amount of high anxiety during certain passages in the Brotherhood series, and I would not have it any other way. The Chosen is another fantastic book in the Black Dagger Brotherhood series.