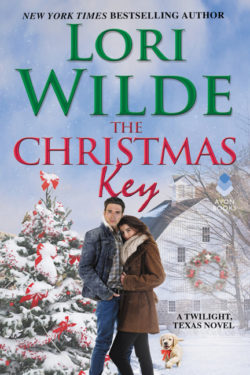 THE CHRISTMAS KEY is the ninth book in the TWILIGHT, TEXAS series, and I was not disappointed. Twilight, Texas is always magical, even if everyone isn’t always happy. The town has its holiday traditions that are unique and quirky like the Kismet cookies and the Sweetheart Tree in Sweetheart Park, which blend into the story nicely.

This is a quick-paced read set around Christmas and contains elements of secrets and sadness, which don’t quite fit in with the joyful holiday spirit. Mark and Naomi first meet by accident when she gets in his jeep thinking he’s the ride from her friend. They have an immediate attraction that neither one of them understands, but it’s one that’s definitely fleshed out in the story.

Mark and Naomi share a connection, but Mark doesn’t know how to handle it since he’s suffering Post Traumatic Stress Syndrome, having been injured in the war almost a year before. There are a lot of family scenes with Naomi’s parents and young nephew, whom she’s planning to adopt. Those scenes are both heartwarming and heartbreaking. Naomi and Mark seem to be there for each other even when one or the other isn’t sure why they are. The characters have a depth to them, and we get to know them a little at a time. Even Naomi’s parents have a few secrets. When they’re revealed, Naomi is none too happy about it.

The descriptions of the holiday and the traditions are a nice touch and made me feel like I was there. The story is filled with family, friends, and a bevy of emotions. There are several different story lines that ebb and flow but all are connected nicely. There’s nice closure with the epilogue and a happily ever after, but I’m hoping that we’ll be returning again to Twilight to catch up on everyone’s lives.

Ms. Wilde is an author whose books I’ve always enjoyed reading, but I somehow missed a few along the way. I plan to catch up on those just as soon as I can!