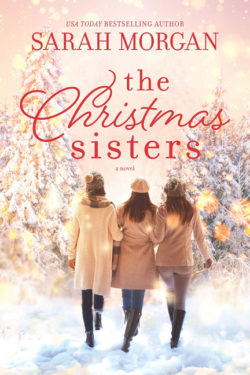 THE CHRISTMAS SISTERS is only the second book that I’ve ready by Sarah Morgan, but I will definitely be back for more!  As the author of both contemporary romance and women’s fiction, Morgan has given me a lot to choose from.

THE CHRISTMAS SISTERS is told by the different female characters, and each chapter is titled with the narrator’s name  (though it did get a little confusing at times.) Suzanne and Stewart are the adopted parents of Hannah, Beth, and Posy. Their parents, along with another couple, died in an avalanche in which Suzanne was the only survivor. Fast-forward twenty-five years where the majority of the story takes place–Suzanne still has nightmares and survivor’s guilt.

The death of their parents shape the lives of the three sisters, and when they all go home to Scotland for Christmas, which is supposed to be an annual visit, they get closer than ever. Their lives are dissected and their love interests, along with Beth’s husband and children, are in the forefront of their minds.

As the three sisters are all at different stages in their lives, they learn to deal with their issues and to rely on each other. Their bonds strengthen, and Suzanne finally learns to let things go. Ruby and Melly, Beth and Jason’s daughters, are a nice addition to the story and lend some lightness and levity along with Posy’s animals.

There are a few surprises along the way, and the story flows nicely. The descriptions of Scotland made me feel like I was there. The story is set in Washington state, New York City, and Scotland–a place on my bucket list to visit! There was nice closure, but an epilogue would have been nice to let us know what happens next to each of them.  A Christmas novella to meet up with them all again would be nice (hint, hint).