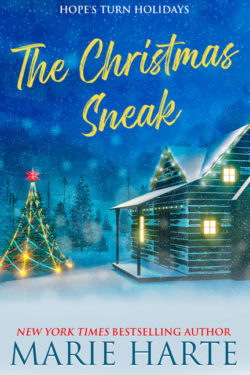 THE CHRISTMAS SNEAK by Marie Harte is the second Hope’s Turn book I’ve read. Such a fun Christmas story with two teenagers acting as matchmakers. Deacon Flashman is a retired NFL quarterback turned microbrewery owner in Hope’s Turn, Oregon. Deacon was burned by his first wife who took him for everything, but most importantly destroyed his trust in women. Deacon has only had casual relationships since his divorce until he meets Nora Nielson, his sister-in-law’s cousin.

Deacon asks Nora out and they have a good time. He really likes her, but that scares him from asking her out on a second date.

A year later, Nora is still hurt he took her out once then dumped her. The problem is, she really likes him and can’t stop her silly heart from wondering what if. Her teenage nephew and his girlfriend decide it’s time to give Deacon and Nora a shove in the right direction and get them together at an isolated cabin in the mountains.

Deacon and Nora spend a week together and tell each other it’s only about sex, but Deacon knows he wants more than a casual relationship. The challenge will be convincing Nora he’s her forever guy.

Deacon and Nora have both been burned by people they loved, but they both find the courage to take a chance on love. Not only does this story deliver a happily ever after, but it’s a Christmas romance that every reader wants to experience.