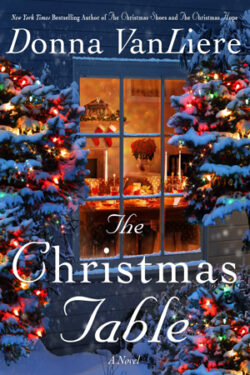 THE CHRISTMAS TABLE is the tenth book in the CHRISTMAS HOPE series. (It’s best to read the books in order to get the full flavor of the series but can be read independently as well.) It was nice to be back at Glory’s Place and with characters I’ve grown to love. This book was a little slow for me when it first started because we were bouncing from 1972 to 2012 and back again. I had a tough time keeping the characters and timeline straight. Once I did, there was a nice flow to the story. Even the small details in the telling played an important role at some point. There were many stories being told in the past and the present that were woven together in surprising ways and added richness and layers to the story.

The importance of the table and the recipe cards was revealed in how they played a significant part in two families’ lives. I liked how Joan and her husband, John, handled her illness and their interactions with each other as well as their two young children in 1972 when the focus was on them. It showed their fears as well as their support. It was interesting to see how the author wove the same comment spoken innocently throughout by different characters, both main and supporting ones, and how it had a ripple effect.

The notability of religion throughout was often subtle until taken in context with other things. Lauren was the center of the story in 2012. She had a troubled childhood and had lived in foster homes. She feared she would grow up to be like her mother. Lauren was portrayed as a caring individual, settling into married life with her husband, Travis, learning to cook, volunteering at Glory’s Place and taking care of friends and her family.  She and Travis had an easy relationship, and I liked how they did little unexpected things for each other. There was nice closure in a very unexpected way that really gave me satisfaction.

I have read all the books in this series except for the previous one, THE CHRISTMAS STAR, which I plan to read shortly. Ms. VanLiere is a go-to author for me of Christmas stories that I can read at any time of year.