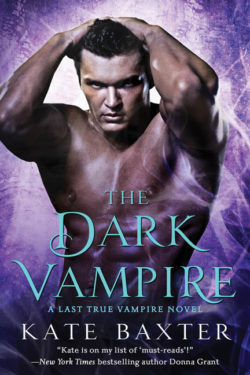 Kate Baxter’s new story in the LAST TRUE VAMPIRE series has it all, danger, heat, suspense and spunk!

Jenner is a ruggedly handsome, imposing, powerful vampire with an insatiable appetite for blood and lust with serious restraint issues. After losing control once, killing a damphir woman by taking too much of her blood, he is considered an outcast in his coven. Years of guilt and disgrace weigh heavily on Jenner and he develops severe insecurities. A victim of unfortunate circumstances, Jenner wonders if he will ever get his life straightened out. Although, unbeknownst to Jenner, a bright, pure force is about to rock his world!

Bria Fairchild, a naïve, stunning and untainted damphir, lives a secluded existence at her uncle’s estate because her uncle fears for her life. She longs for independence and slips in and out of the compound at night, undetected, to revel in some rooftop fun. Her uncle protects her from a vicious, revenge-riddled witch. Bria doesn’t realize how much in jeopardy she is until the night her uncle’s coven is violently attacked. Bleeding profusely after being stabbed, her uncle rushes Bria to Mikhail’s mansion and pleads with the vampire to save her. Her life is saved when Mikhail, the vampire king, changes her into a vampire. Does Bria adapt to her new life easily? What happens when Jenner gets a whiff of her scent and her blood? The surprise goes over like a ton of bricks! On top of that, Bria’s uncle asks Jenner to be her bodyguard! Oh boy, this does not bode well…

Blood, lust, breathless suspense, voracious desires and mysterious forces create a captivating combination in Kate Baxter’s new novel THE DARK VAMPIRE. Jenner, a ruthless vampire with a cocky air, is fiery, gritty and passionate. However, an intriguing damphir, Bria Fairchild, is Jenner’s undoing because, miracle of miracles, it turns out they are soul mates. Whoa boy! Thus, the story unfolds with rejection, anger, tears, shouting, danger, passions and violence, etc. Will Jenner get a hold of his emotions? Can Bria accept her new life without qualms? Then there is the ever-lurking evil presence that is after Bria. Will they capture whatever or whoever it is? There is plenty of action, complete with a raw romance and smart, witty dialogue. If you like explosive vampire stories this one is a winner! Plenty of hair-raising episodes and wickedly dangerous characters fill the pages of Ms. Baxter’s fabulous novel. I l-o-v-e-d it! THE DARK VAMPIRE is a big thrill ride and oh, so sizzling hot!