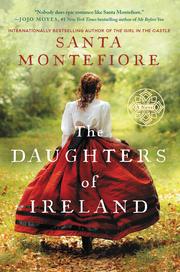 I was very excited to have the opportunity to read and review THE DAUGHTERS OF IRELAND. I was disappointed because the book left too many loose ends. It is NOT a standalone novel. This is the second book in DEVERILL CHRONICLES TRILOGY which follows three women through decades of the twentieth century. I imagine all the loose ends will be tied up in the third book, but I don’t know that for sure.

The story begins in 1925, long after the Anglo-Irish war is over. The war damaged Castle Deverill, in West Cork, Ireland. The home to the Deverills for hundreds of years is put up for sale. Celia (Deverill) Mayberry and her husband buy the estate and plan on repairing it.

Celia has good memories of her childhood and running through the halls of the castle with her cousin Kitty Deverill and their friend Bridie Doyle.

Celia spends tons of money and when the depression hits, she must sell the castle. Her future takes an unexpected turn and she ends up in Africa.

Kitty Deverill is grateful to her cousin for buying and renovating the castle, but she misses the days when she was the mistress of the castle.

While Kitty is content with her life with her husband and her adopted son, who is her half-brother, she yearns for Jack O’Leary who won her heart years before during the war. Kitty is constantly struggling with her choices in life.

The third daughter of Ireland is Bridie Doyle. Her mother was one of the cooks at castle Deverill when Birdie was a child. After an illicit love affair with Lord Deverill produces an unwanted child, she gives the baby up for adoption and flees to America. Now living in New York, wealthy and married she is still pained by memories of the baby she gave up, and who Kitty is now raising.

This story reads like a soap opera. It jumps from storyline to storyline, and never gives any satisfying resolutions.

The writing is good. Descriptive passages excellent and that is why I did give this story 3 1/2 hearts.