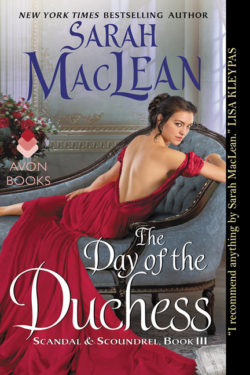 THE DAY OF THE DUCHESS by Sarah MacLean, is the third book in the Scandal & Scoundrel series.

This story takes place in the early 1800’s. Seraphina was shocked when her interfering mother set a trap to catch Malcolm Bevingstoke, Duke of Haven, and her daughter in a compromising position requiring they marry. The mother knew her daughter was socially beneath the Duke, and wanted to insure her daughter’s marriage. Sera was deeply in love with Malcolm and believed he would marry her without entrapment.

Malcolm thought they were deeply in love and the trickery made him furious. He is still having a hard time forgiving Seraphina, when their baby daughter dies at birth.

Pushed away by Malcolm, and full of sorrow over her baby’s death and the news that she would never conceive again, Seraphina runs away to America. There she becomes a singer and pary owner of a night club. After years of her self-imposed exile, Sera returns to London to request Parliament grant her a divorce so that she can start living in London and have a life free of the bonds of marriage.

Malcolm in years since his wife disappeared searched for her in many different countries, but never found her. Once back in London except for his Duke and parliamentary duties, he has lived the life of a recluse. As a Duke he needs an heir. When Sera appears in Parliament asking for a divorce, he is shocked. He requests she meet with him in his chambers. He tells her he will see that the divorce is granted only if she finds her replacement.

Sera agreed. Then spends the summer in close quarters with the Duke she no longer wants. She hosts parties, interviews prospective brides, and finds she still has an attraction for the husband she left. Sera invited her three sisters to stay with her at the estate for the summer. Hoping with them in residence she’ll have more resistance to the Duke.

There are plenty of sensual encounters throughout the summer between the Duke and Duchess. Neither one feel they are worthy of love. She thinks he needs another wife who can give him a child. He is riddled with guilt for the way he treated Sera during the early days of their marriage. Even so, the encounters happen and a spark is ignited in their hearts.

Malcolm takes the summer to try and woo his wife and convince her that regardless of the past, only he can give her the happily ever after she deserves.

I love the ending of this book. It’s not what I expected, and I’m not going to ruin the surprise.  The dialogue is witty and charming and the book is a real page turner.